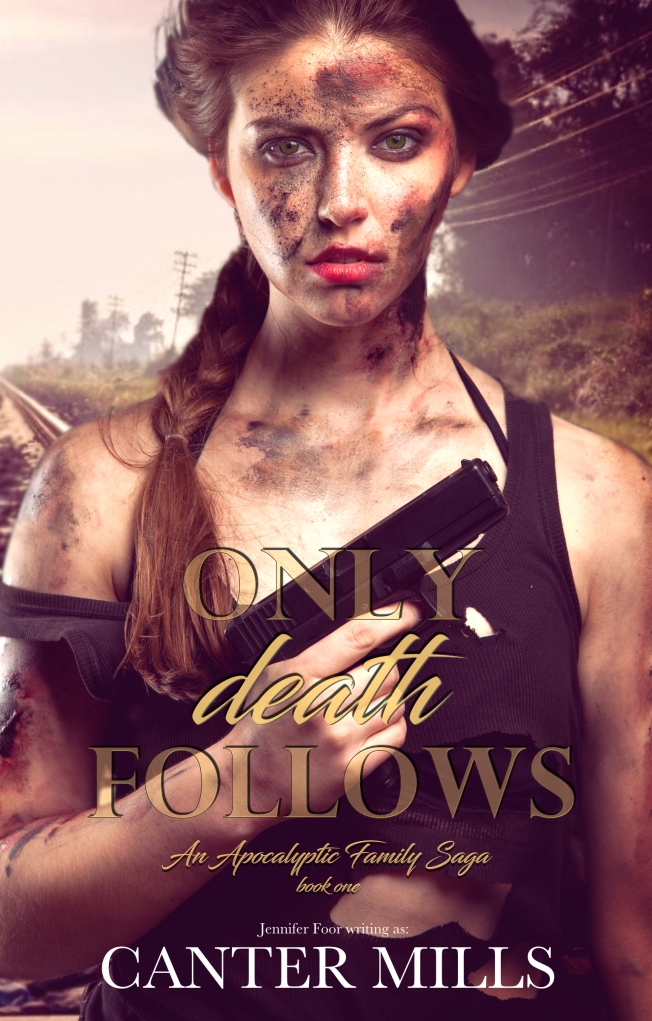 Only Death Follows is the first book in a new apocalyptic romance series from Author Jennifer Foor, writing as Canter Mills.
This series features a family divided, lost, and determined to find their way back to one another while everything around them is dying.
After a government created virus has killed ninety-percent of the world’s population, the few survivors must learn to live without the conveniences of electricity and running water and other modern day amenities. With the infected still contagious, and groups of rebel militia seeking domination, it’s a fight to remain alive. One family will stop at nothing to stay together and find refuge.
Book One features Nova Knox and her struggle to get her brothers to safety while the rest of the family is missing and possibly dead.

Everything has changed.
It’s a fight for survival.
Death is chasing us down, and no matter how far or fast we run, we’re staring it straight in the eye and daring it to take us.
I have one purpose; to protect my family.
Dead or alive, nothing will stand in my way.

Thanks to a group of fellow tweeters, my book series is going global. I have received reviews from people all over the world. I am thrilled for the progress that it is making, and I would like to say thank you to all.

Book five is really coming along, and so far, it is going to be the last book in the series. The characters have come to the final chapter in their stories, and I am very excited to share them with everyone.

On April 28th The Somnian Book One Ascension is FREE. Feel free to pick up your free copy on Amazon. This series is action packed and full of love.

My book series is in the YA genre. It is about a 17yr old boy who loses his father tragically,then has to move to his mothers home town to stay afloat. A dear family friend,an old woman who happens to live next door, becomes more than Jesse could have imagined. As the first chapter unfolds readers learn that Jesse has the strictest mom ever,is lusting for his best friend Steph, and seems to be dealing with life changes the best he can. On his 17th birthday everything changes for Jesse when he begins to ascend,and learn that he is the chosen Somnian, a nephilim, and gate keeper to the portals of hell.

Throughout the rest of the book Jesse is faced with life altering decisions. He seeks refuge in the arms of his soul mate, and tries to protect everyone the best he can. I don’t want to give away any more details of the story line. I promise there is much more that I didn’t even hint about.

The reviews for this series have been excellent,including a review from a 36yr old man who stumbled upon the series and is now one of my biggest fans, even though he doesn’t even read this genre EVER.  Until now 😉

I hope you take the time to at least sample this book for free on Amazon. There is something for everyone in this series. Books one through three are available starting at just .99cents. Book four is set to release on June 1st.